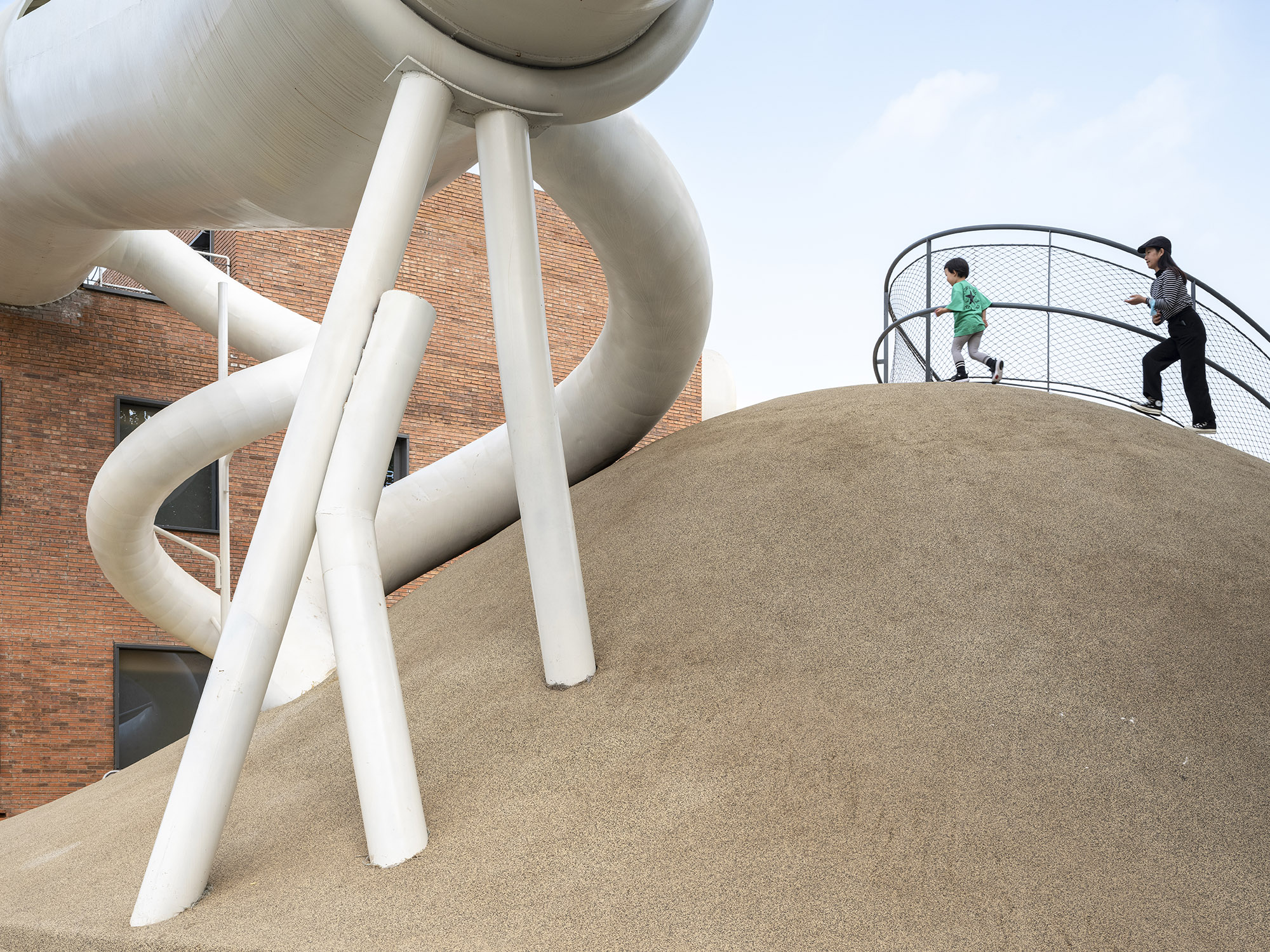 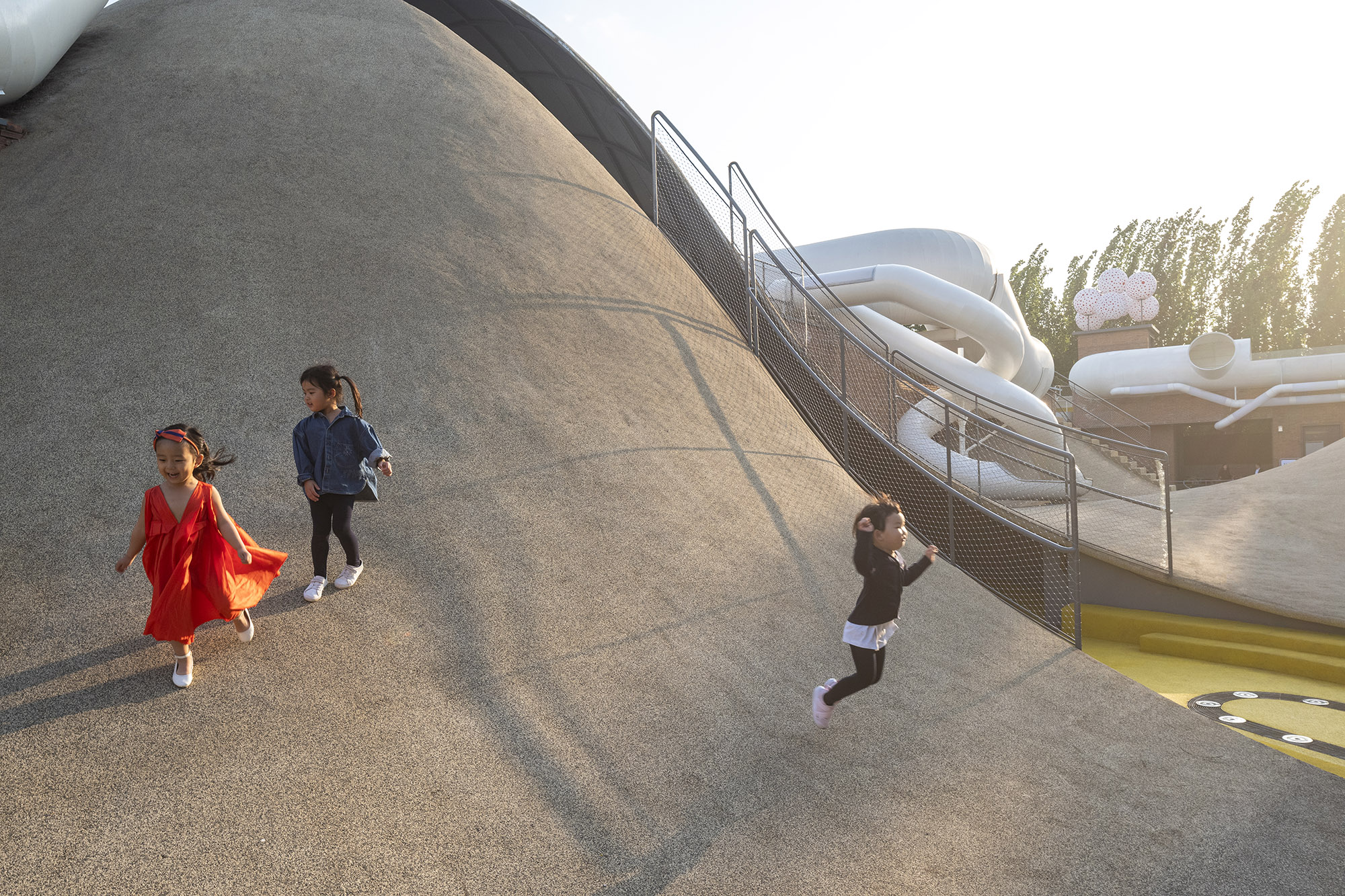 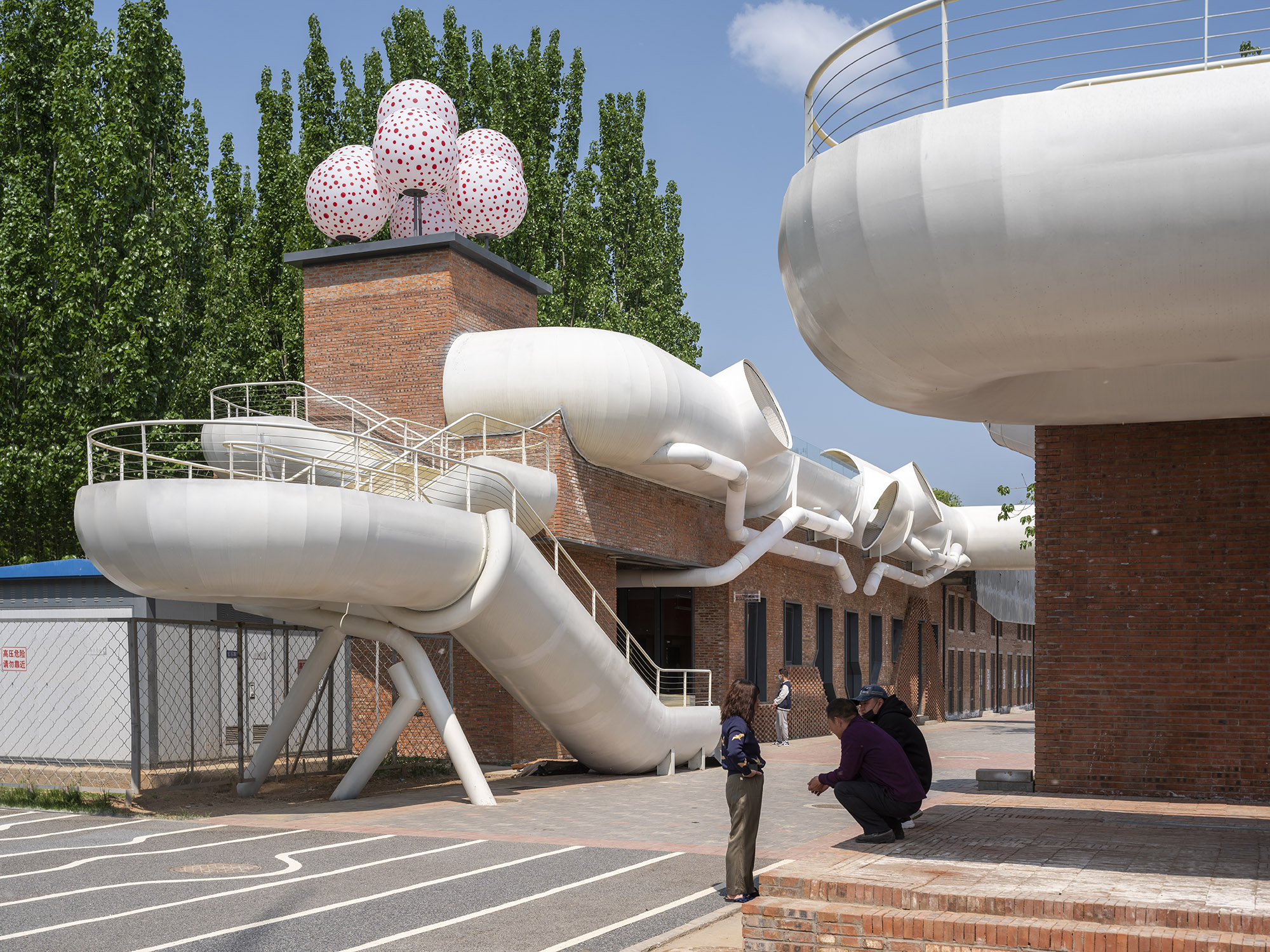 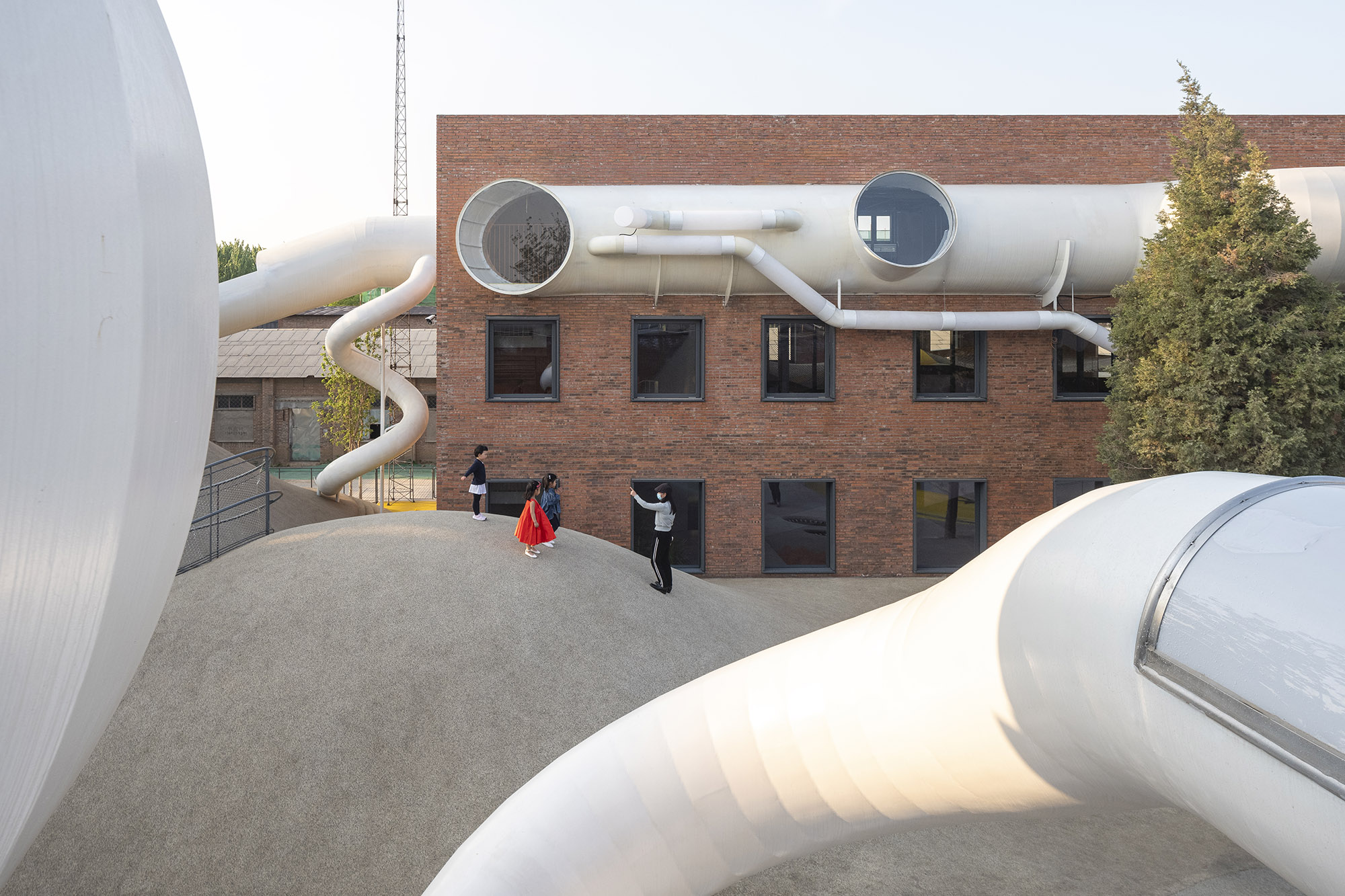 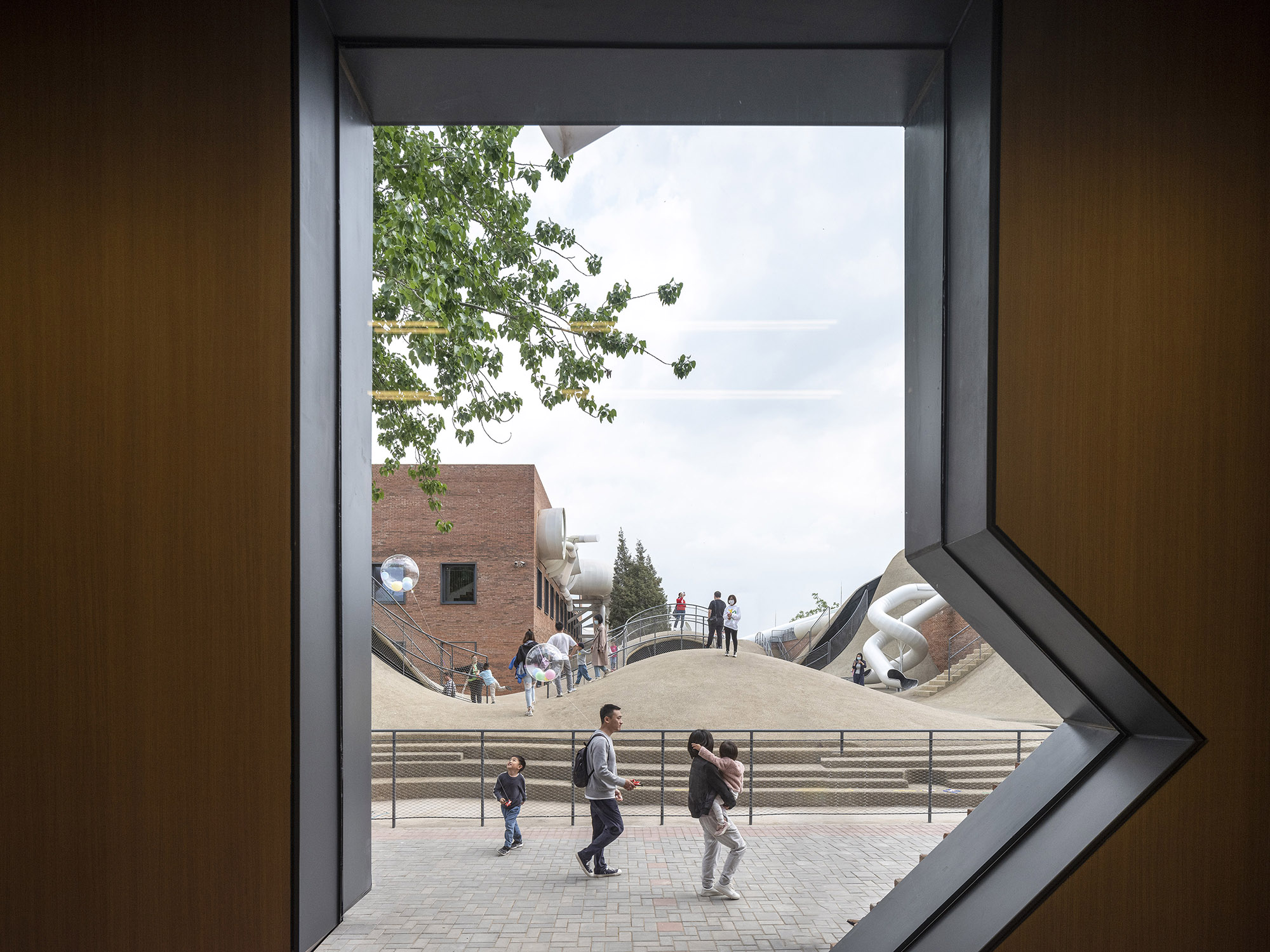 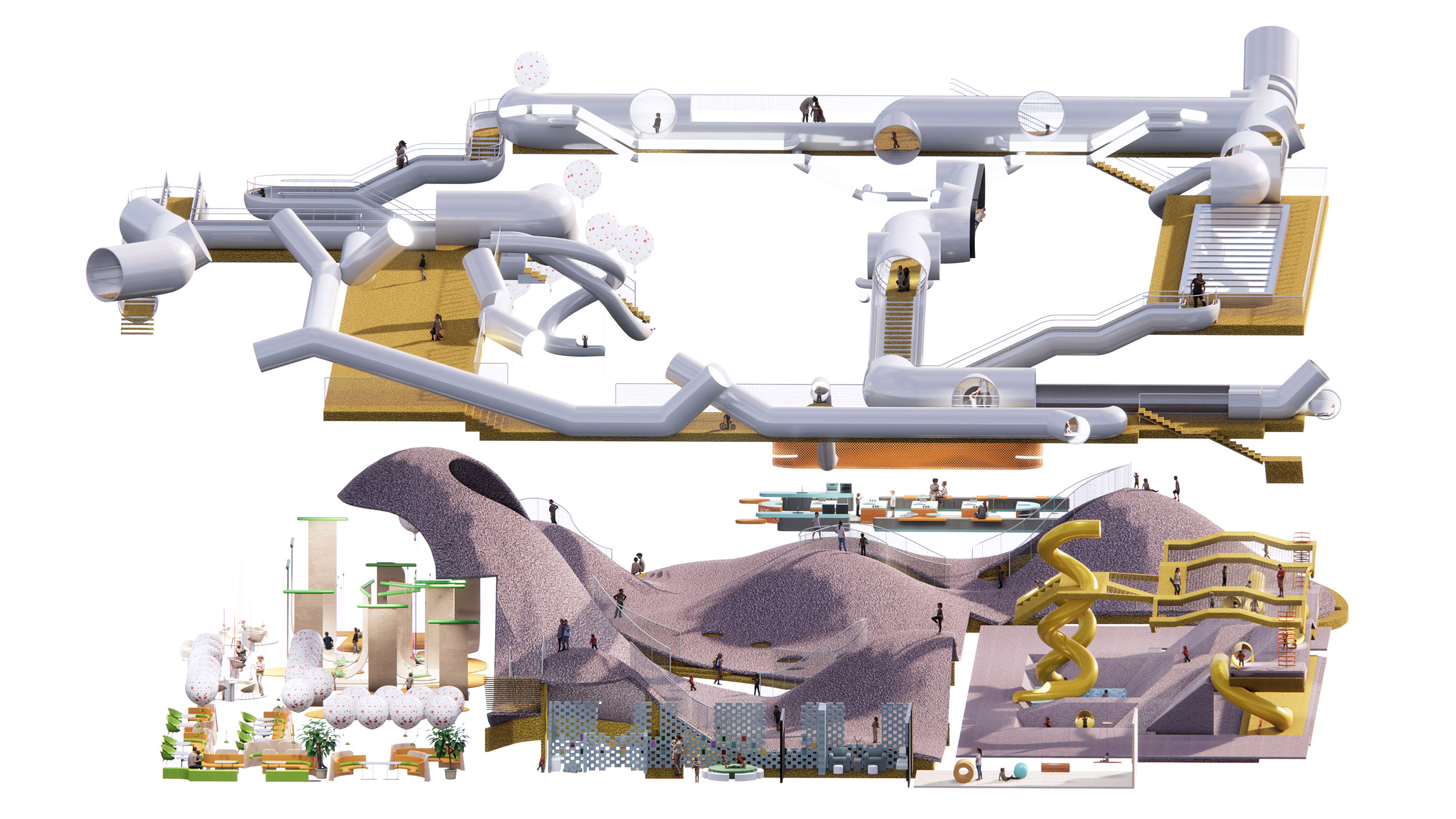 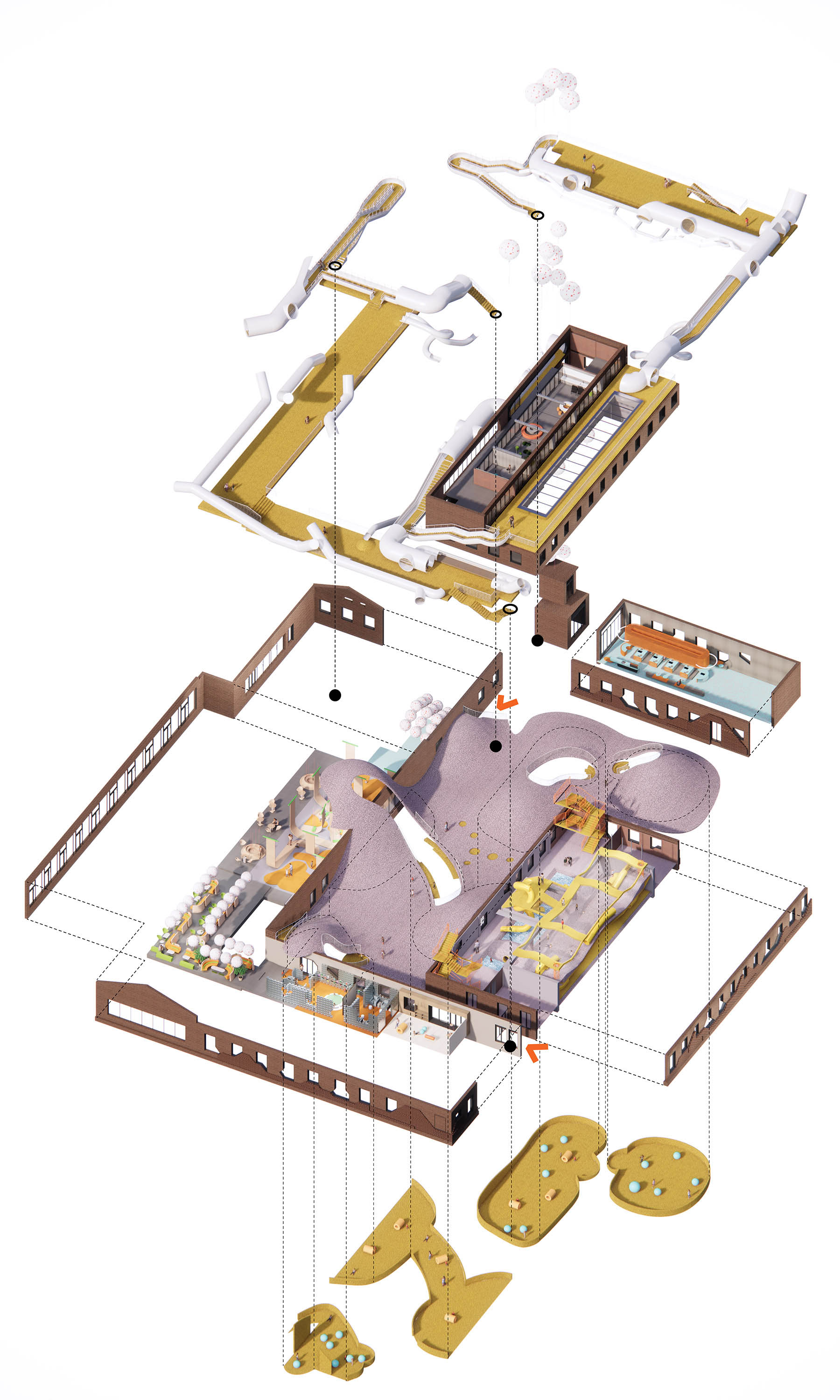 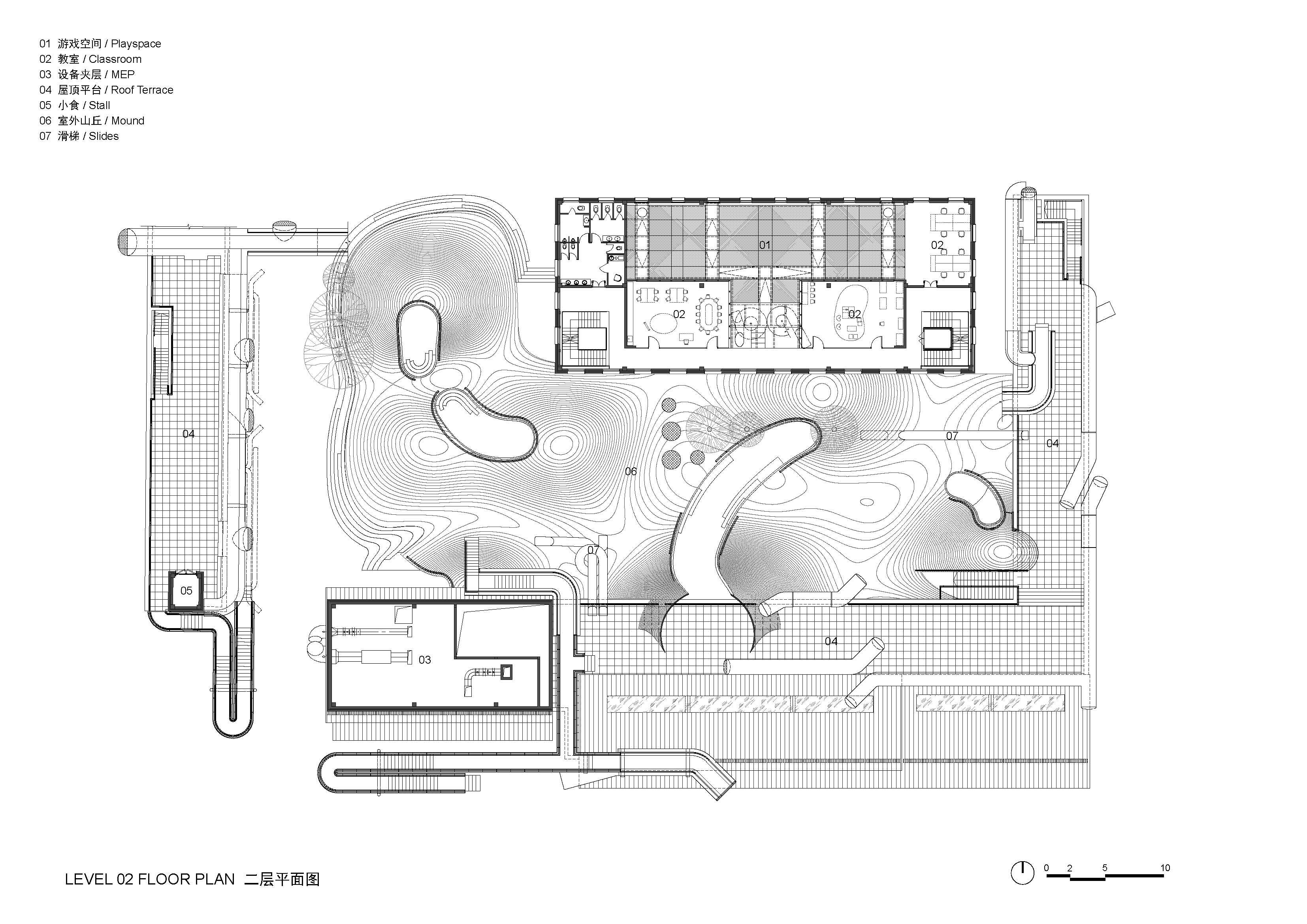 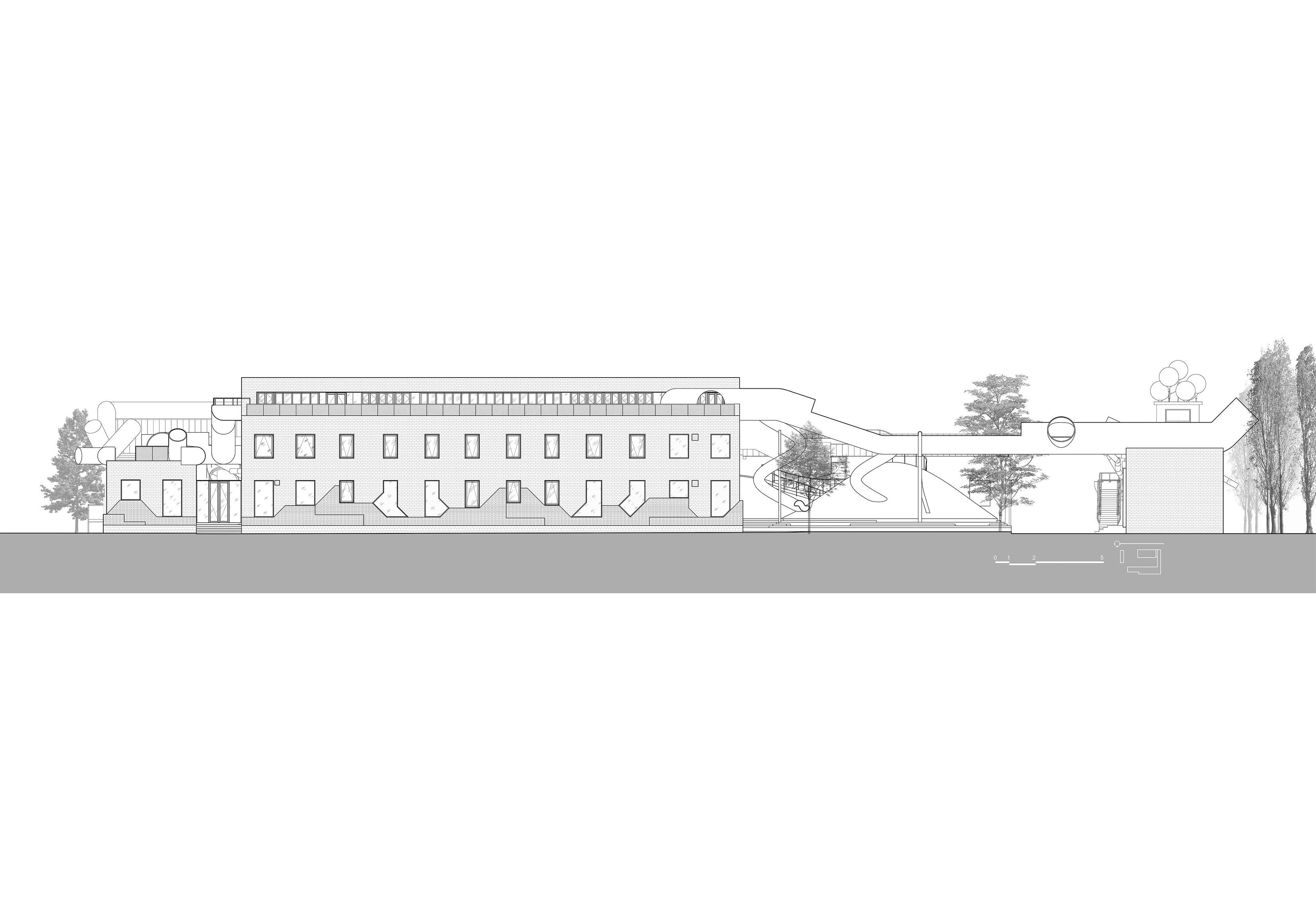 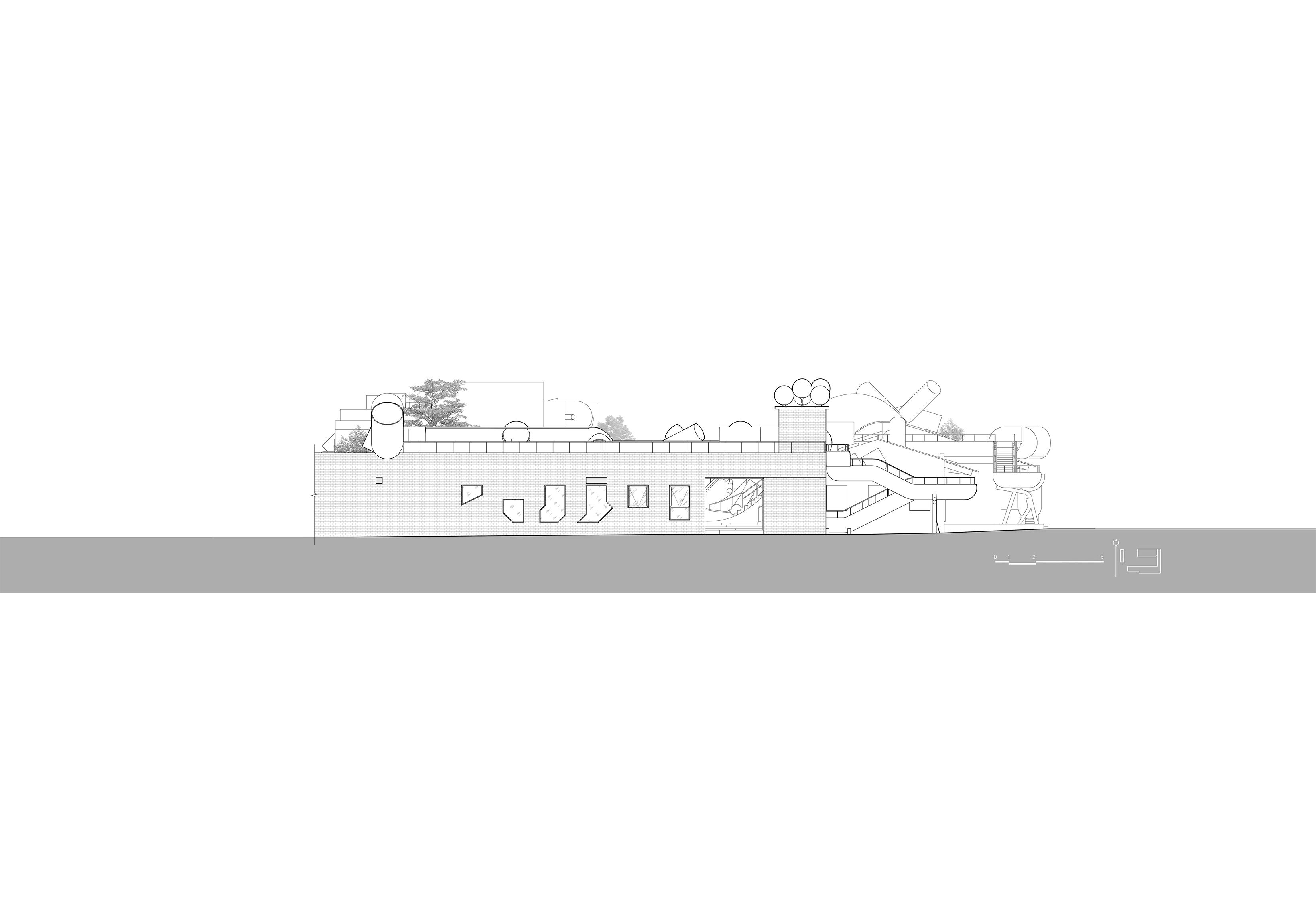 “Balance is invisible until it’s lost”

The playscape is a refurbishment inside an existing industrial complex in the north of Beijing. A 1970’s warehouse complex for grain storage supported by a transport facility. Our client was a healthcare provider specializing in observing, and supporting children’s development relating to movement for a broad range of age groups.

Concept (Back to the Neighborhood)

We believe the missing element of a child’s development in a modern Chinese city is chiefly a functioning neighborhood. We hoped to create the experience of street play and prioritize the reduction for gizmos and screen time. Drawing inspiration from popular culture of the past and abstracting important identities for our new neighborhood’s character. The playscape embodied the following traits;

The playscape is a tool to promote learning while allowing narrative creation for children to dream and develop senses relating to equilibrium (balance) and proprioception (awareness). Balance is taken for granted until it is challenged. It is our hope that activity based emotional responses to this built environment and the perceptions harnessed. Can augment the client’s tools in helping strengthen co-ordination within the child’s development.

Three main architectural interventions embedded the themes of play from the concept;

The building complex is formed by a cluster of existing warehouses encircling a courtyard. A public street disconnects the south building which is re-connected by the use of an aerial bridge to link the roof terraces. Access also provides a private route to an adjoining Kindergarten, and an option to enter the adjacent public park.

The existing cluster provides for 3 internal play spaces. Playspace 1 is a single level low pitched 6m volume. Used for 2-4 year olds as a crawlspace with hanging fabrics. Features also include a soft space topography for babies supplemented with a restaurant and library. Playspace 2 is divided vertically into three levels. A tiered environment for ages over 4 including a subterranean interactive environment, a steep climbing topography, with a suspended tensile Net all connected with slides. Additional directed learning can be found on level 2 and 3 with a total of 6 Multifunctional Classroom’s. A single slide connects vertically 7m from the classroom to level 1. The South Building competes the courtyard adjacent to the road with views into a public park. All buildings have a looped roof terrace easing parents observation of children, while being able to access parent specific amenities including a terraced bar.

Children are often passive in decision making scenarios. Play is often the only period under their own control. The Design Focus was to address the missing elements of inner city dwelling, distorting scales, manipulating movement sequences to build a tool for sensory learning. Where the iconography of the project becomes about the activity and embracing a degree of risk we hope to nudge children to imagine and feel what they see as the limits to their own adventure.

“In Play you don’t foresee an end product. It allows you to suspend judgment. Often the solution to one problem sparks a possibility for another set of problems… In the actual building of something you see connections you could not possibly have foreseen on that scale, unless you were physically there” Richard Serra.